Looking for a unique spot for a vacation?  There is a place in OC that may be one of the most visible secrets you will find here at the OC You Don’t See.


Take a drive down Pacific Coast Highway from Long Beach toward Seal Beach, and just as you get to a curve in the road at Sunset Beach, you will see the famous Water Tower Home on the ocean side of the street.  The tower was originally built in the early 1900’s to supply water to the steam locomotives that traveled up and down the coast. Those trains were long forgotten by the 1980’s, and the city was considering tearing down the 85 foot structure.


Developer George Armstrong had another idea.  Partnering with his son, Dan, and anesthesiologist Robert Odel, Armstrong bought the structure (which was completely infested with termites) and began a long restoration project to turn the tower into the most unique home along the California coastline. Replicating the look of a water tower, the team removed the tank that once held 75,000 gallons of water and set to rebuild the enormous supports. 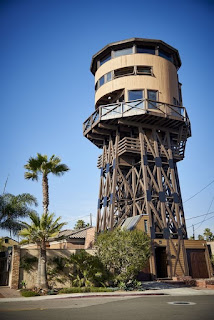 When they replaced the tank, they converted the structure into a three-story home with vista windows looking in every direction.  Set high above the busy PCH below, you can view the entire coastline from Palos Verdes down to Dana Point, on a clear day.


An amazing home with a completely windowed third story, the developers sold the tower in 1995 to Gerald Wallace, who tried selling it several years later… and then again, and again.  Seems no one wanted to buy a converted water tower with terrible street access.  There is an elevator, but it is small, so most large pieces of furniture must be brought up the towering stairways.


Finally, some new developers bought the property, and now for the secret: You can reserve it for your very own water tower vacation.  Yes, the Sunset Beach Water Tower House can be yours for a night or a week, and as of this writing, the cost is slightly less than $1000 per night… plus a $300 cleaning fee.  You can book it today on Trip Advisor!
at April 16, 2019

The Infamous Modesta Avila There are a lot of people expressing their opinion regarding what constitutes a peaceful protest, and how far pe...